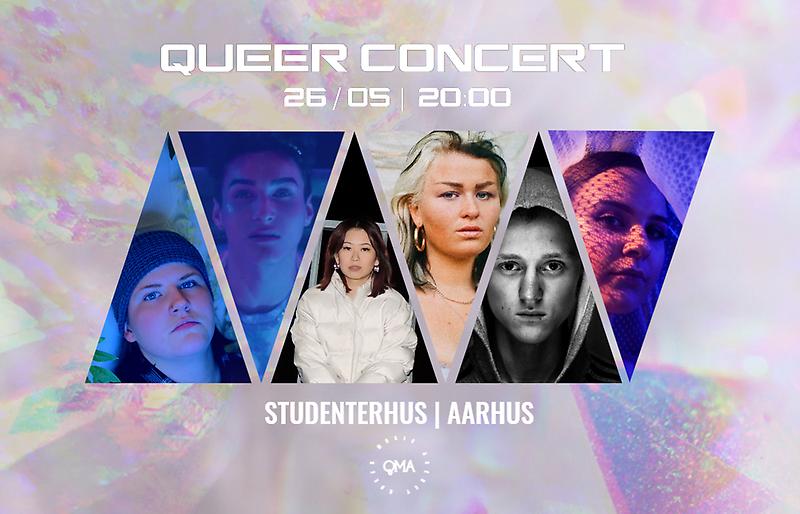 Queer Music Agency is the only music agency in the world to solely represent queer artists. We are a combined management agency, booking agency and record label that represents artists across all genres from 80s synthpop to hip hop and from techno to classical music. We aim to create more diversity in the music industry, as well as a strong community for queer artists, who are all too often neglected. Our efforts will hopefully bring new musical experiences and a better balance in the music industry, so more queer artists can make a living from music.

The artists playing at this Queer Concert will be:

Sander Eagleroad Sanchez is a 25-year-old artist from Denmark, currently living in Copenhagen. He is half Native American from South Dakota and half Dane - and started writing his own songs accompanied mostly by piano in the age of 13. His musical style is much inspired by Dynamic pop, R&B, 80’ pop, Funk music, Indie, Soul and New age EDM. He started singing the moment he had a voice and has performed at stages, such as: Smukfest Festival, The Danish finals of Eurovision and World Pride Copenhagen 2021 among artists such as MØ and Todrick Hall.

His expressive aesthetic is dominated by a colorful and light-bending universe. He loves reflective lyrics and a dynamic soundscape and aims to touch the heart of his listeners through soulful music with a poetic depth and sound – and has incorporated much of his cultural background and heritage into his overall expression.

Artist and producer Taralillah experiments with both the masculine and feminine in her productions, she also dives into the brave and odd visual universe, which stand to represent her Icelandic roots.

The ideas creep out of the shadows at night after Tarallilah has gone to bed - this is when the flow starts, this is when no judgmental looks are allowed to critize the feminist rebellion - the future is not cis, it is not hetero and it is not male- it’s Tarallilah.

Taralillah’s lyrics and music have in common that they point out and distort the normative effects of beauty and female dominance.

She is able to express freedom in her lyrics by writing explicit pieces of music that push the boundaries society has placed upon us.

As a part of her musical storytelling Taralillah challenges her production to express and amplify the strength, feelings and anger.

Her songs have a strong electronic mix of dance-pop, house and techno.

Nana is a 24-year-old singer-songwriter and producer based in Aarhus who creates songs in her bedroom at home. The love for creating her own music defines Nana as an artist and the genre bedroom pop.

Her sound is inspired by r&b and is full of 80’s synths, choral arrangements, heavy beats and a feminine vocal that connects the vulnerable and truthful lyrics about everything from a broken heart to the fear of growing up too fast.

The vision is to wrap the difficult storries in a pop form so the listener can feel more optimistic.

Ella is a 23 year old Irish/danish upcoming artist based in Copenhagen. Since Ella was little she always had a strong affinity for music, stacking up on CD’s whenever she could and always keeping an eye out for new music. When she was 16 she

bought her first guitar and since then she has been writing, singing and composing songs.

Ella is always bettering herself, and focusing on genres like indie/folk/alternative-pop, she gets this chance. Ella’s music is very lyrical and you won’t doubt what she is trying to express when listening to her music.

Mark is a 25 year old singer/songwriter based in Silkeborg. Mark fell in love with music and writing lyrics from a very young age, and through his lyrics he tells his story and expresses those feelings he can’t put into words.

Mark does a mixture of singing and rapping, that really connects you to his vunerable side and through his music, you will really get to know Mark.His vision is to let people know that they are not alone in this world, and that it’s okay to show your emotions.

NOVA (they/them) is an upcoming queer DJ, who has just started their DJ journey because they have a great love for music – especially techno and electro, which is their favourite genre. They are also smitten by house, disco and hip hop. NOVA’s goal is to please your ears and create a space where you can connect and escape to music that will make you euphoric, ecstatic and make your body want to dance while feeling the vibe NOVA creates.